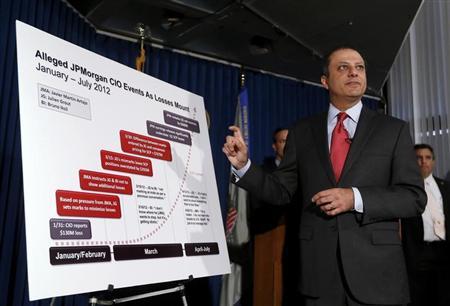 grand jury has indicted two former JPMorgan Chase & Co (JPM.N) traders at the center of the bank’s “London Whale” scandal, court papers made public on Monday show. Javier Martin-Artajo and Julien Grout were accused of hiding hundreds of millions of dollars of losses within JPMorgan’s chief investment office in London by marking positions in a credit derivatives portfolio at inflated prices. Those losses were part of an overall $6.2 billion trading loss suffered by the bank centered on Bruno Iksil, the former trader known as the London Whale. Martin-Artajo supervised Iksil, while Grout worked for Iksil. According to the indictment, Martin-Artajo and Grout from March to May of 2012 artificially inflated the value of securities “to hide the true extent of significant losses” in a trading portfolio. The indictment said both men did this to enhance their prospects for promotions and bonuses, while Martin-Artajo hoped to stop JPMorgan from moving the trading portfolio to another division, and Grout wanted to curry favor with his supervisor. Martin-Artajo and Grout were each charged by the grand jury with five criminal counts, including securities fraud, wire fraud, conspiracy, making false filings with the U.S. Securities and Exchange Commission and falsifying books and records. The government wants the men to forfeit proceeds traceable to their alleged offenses, including compensation from the largest U.S. bank. The case was assigned to U.S. District Judge Lorna Schofield in Manhattan. JPMorgan is not a defendant in the criminal case, but is nearing civil settlements with U.S. and European regulators that could result a $700 million payment, a person familiar with the matter said on Monday.

bank by assets more than $6 billion. Sources on Monday confirmed to FOX Business that the fines are part of a settlement with regulators that will also include an admission of guilt by JPMorgan that bank officials did not properly manage the trading desk where the wrongdoing occurred. New Securities and Exchange Commission Chairman Mary Jo White has pushed for admissions of guilt in civil cases filed by the securities regulator, a policy shift prompted by criticism that financial institutions often get off too easily after breaking securities laws. The fines and settlement terms are expected to be announced later this week, possibly Wednesday. Spokesmen for JPMorgan and the SEC declined to comment Monday. The penalties come on the heels of criminal charges filed by the Justice Department in August against two former JPMorgan traders for their role in last years ‘London Whale’ debacle. The government alleged in four-count indictments that Javier Martin-Artajo and Julien Grout participated in a conspiracy to hide and misrepresent losses taken by the bank. The duo was charged with falsifying books and records, wire fraud, and false filings with the Securities and Exchange Commission. Preet Bharara, the U.S. Attorney in Manhattan who is overseeing the criminal case, has said the defendants repeatedly and deliberately lied to cover their losses. The SEC filed a parallel civil complaint seeking to force the two to return any ill-gotten gains and pay civil penalties. The cases stem from massive losses that occurred in early 2012 after a London-based JPMorgan trading desk made a series of large derivatives bets that soured. The losses have been the subject of intense scrutiny from regulators because the bets suggested that big Wall Street banks were still taking excessive risks even after the financial crisis of 2008. Martin-Artajo and Grout allegedly took part in a conspiracy to hide their losses by “artificially” inflating the value of holdings tied to the derivatives bets that soured. The conspiracy caused the New York-based bank to report incorrect quarterly results for the first quarter of 2012, the DOJ alleged. The SEC said in its complaint against the two traders that it plans to hold the bank accountable for filing inaccurate financial statements.