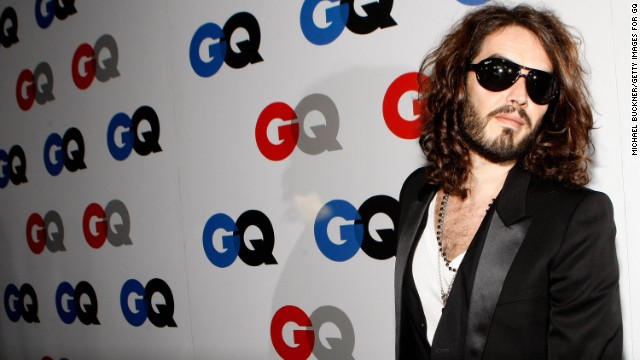 Swift exit: Russell seen arriving at the GQ Men of the Year awards at The Royal Opera House on Tuesday And after the mayor made jokes regarding the recent chemical attacks and subsequent deaths in Syria, Brand said: ‘Glad to grace the stage where Boris Johnson has just made light of the use of chemical weapons in Syria,’ during his acceptance speech for the Oracle award. ‘I don’t know if I would be alive if it wasn’t for her’: Robin Thicke gushes about wife Paula Patton in wake of groping scandal ‘Meaning that GQ can now stand for genocide quips. ‘I mention that only to make the next comment a bit lighter because if any of you know a little bit about history and fashion, you’ll know Hugo Boss made the uniforms for the Nazis,’ he added. ‘But they did look f****** fantastic, lets face it, while they were killing people on the basis of their religion and sexuality.” Brand, who ended his speech by telling Noel Gallagher, another of the winners on the night, “Good luck getting more offensive than that, son”, was then according to The Sun kicked out of the aftershow party in central London. A spokesman for GQ declined to comment on the claims when contacted. Brand was seen chatting to Noel Gallagher and Rita Ora at the party, but he looked unnerved after taking a few photos with fans, and then made a swift exit accompanied by his security guard. Offensive: GQ editor Dylan Jones with The Who rocker Roger Daltrey. Jones told Brand what he did to the event sponsors was ‘offensive’ Brand took to Twitter to tell his fans about an exchange he said he had with Jones The comic took to Twitter to tell his fans about an exchange he said he had with the magazine’s editor Dylan Jones, writing: ‘GQ editor: What you did was very offensive to Hugo Boss. ‘Me: What Hugo Boss did was very offensive to the Jews’, which was accompanied by the hashtag ‘#nazitailor’. The fashion firm backed the event to the tune of 250,000, and would no doubt have been left reeling by Brand’s tirade which included him putting a finger under his nose to mimic Hitler’s moustache and goose-stepping on stage. It isn’t the first time Brand has run into trouble at the annual bash. In 2006 he was involved in a row with Rod Stewart after telling guests at the event he had slept with his daughter Kimberly. In 1999, GQ editor James Brown resigned after the magazine published a list of of the 200 most stylish men of the 20th century, which included the Nazis and Field Marshal Rommel alongside Humphrey Bogart and John F Kennedy. The star-studded dinner and pretty raucous award ceremony with a night full of barbs and verbal fisticuffs attended by celebrities including Lou Reed, Simon Pegg, Sir Bobby Charlton, Rita Ora, Rosie Huntington-Whiteley and Justin Timberlake. Off colour: Rob Brydon joked about Stephen Fry’s suicide attempt The event at the Royal Opera House, in Covent Garden, central London, was hosted by comic Rob Brydon who led from the front with an off colour remark about Stephen Fry. Russell Brand: “I Don’t Watch Films or Have Sex or Anything. I Just Drink Juice”

I think I heard church bells ringing in reaction. Congresswoman Michele Bachmann was briefly an icon of the tea party movement and even pursued an ill-advised presidential campaign that resulted in numerous — and ongoing — ethics investigations. Bachmann used her 15 minutes of fame to divide and demagogue our national debates, routinely accusing opponents of being anti-American and parroting conspiracy theories from her congressional pulpit. Her frequently fact-free accusations made her a favorite on the far-right, but interestingly it is liberal Democrats like Dean who already think they’re going to miss her the most, while Margaret sees her departure as a win for reforming the Republican Party. Russell Brand is best known as a British comedian and TV/film star, who, in addition to co-starring in the upcoming animated film “Despicable Me 2,” is also a Solzhenitzyn-quoting, part-time essayist. In the wake of the barbaric beheading of a soldier in London, Brand wrote an essay in The Sun called “Blame this on madness…not Muslims.” Big Three podcasters John Avlon, Margaret Hoover, Dean Obeidallah Click here to hear podcast Dean was particularly touched by the effort to defend the Muslim community from the ugly passions stirred by group blame. Brand’s perspective is that mental illness is more at fault in the attack than the influence of radical Islam and that root causes must be analyzed, as well. While I agree with Brand’s assertion that we can’t let extremists determine the terms of debate for the rest of society, especially when their goal is to take us off center by inspiring further hate and distrust, I’m not convinced that taking troops out of Afghanistan would stop terrorism — and, unlike Brand, I think that evil exists. But it’s a lively, thoughtful conversation — especially considering that Brand informed us afterward that he conducted it naked looking in a mirror. Which is a sideways segue to commemorating the end of another college year. Yes, its commencement address season and already words of wisdom are being dispensed on college campuses across the country by the likes of Stephen Colbert, President Obama and Wolf Blitzer. The millennial generation is coming of age and we debate whether the “everybody gets a trophy” ethos (plus the uphill economic climb) has left them well prepared for life after college. Dean orates a commencement address of his own, while Margaret and I dispense our advice (you have to be willing to work hard if you want to follow your bliss). Plus, I trot out a dimly remembered quote I like: “The only place where success comes before work is the dictionary.” Our collective consensus slogan: Ladies and gentlemen of the Class of 2013: Lower your expectations. I had a beautiful time. And I also just did shows in San Francisco and Seattle and Portland, and they were great as well. The Messiah Complex worldwide tour got a little less worldwide when your dates in Abu Dhabi and Lebanon were canceled. You seemed pretty excited about those gigs. Do you hope to get back there one day? Yes. I hope so. But I am sure that there are other priorities in that region at this time. And that can’t go on forever, can it? The idea behind this tour, where you are looking at these famous leaders and dissecting why people honor them; How did the idea of building a show around that concept first come to you? I realized what a privileged position I am in as a comedian, and I can talk about anything I want. And I thought about, “Well, what really interests me?” And what really interests me is people who come up with ideas that change society. I don’t mean in the world of consumers and technology.